After leading the Dutch GP, Lewis Hamilton finished the race in fourth and Max Verstappen took the victory on his home turf; Hamilton remains confident Mercedes will secure a race victory this season and "challenge" Red Bull once again

Lewis Hamilton admitted he is “dying” to have the opportunity to race Max Verstappen again as he remains confident a win for Mercedes is in his sights this season.

Hamilton came arguably the closest he has to victory this year at last weekend’s Dutch GP before a combination of strategy risks and safety cars saw him drop to fourth and Verstappen ultimately take the victory.

After a 2021 season centred on fighting the Red Bull team, Hamilton is desperate for Mercedes to get back in the mix and cannot wait to take on his old rival once again.

I’m dying to get back in that race and have the opportunity to fight Max, but the day hasn’t come [yet],” said Hamilton

There’s so many great things to take [from the Dutch GP]. If this can be the same in the future races, we’re going to be continuing to breathe down their necks and get that win.

“I’m taking all these positives forwards, so grateful for the team and all their hard work because it has been a tough slog for all of them. Let’s just not give up.”

Verstappen’s win at his home race catapulted him 109 points ahead of Charles Leclerc in second place and it is clear he is a driver who is full of confidence, not just in himself but in his car too.

One of Mercedes’ strategy calls that was debated was their decision to pit George Russell under the safety car but not Hamilton, allowing Verstappen to easily overtake Hamilton for the lead.

While some believe leaving Russell out as a buffer would have been the correct decision from Mercedes, Verstappen remained adamant he would have secured victory even with the added task of passing Russell too. 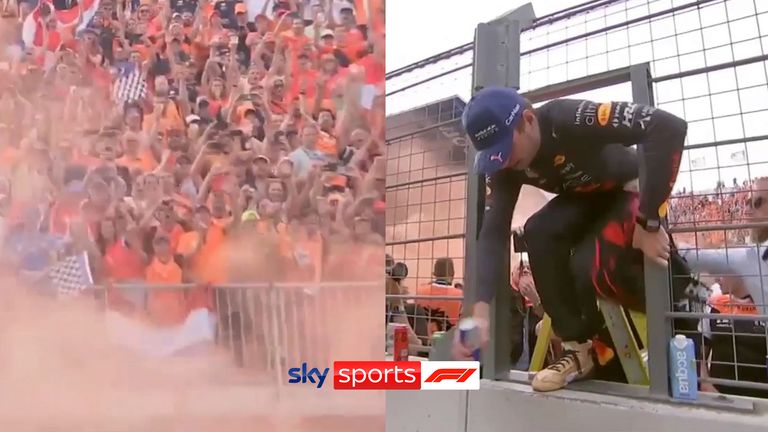 “When you look at the whole weekend it has been pretty incredible,” said Verstappen.

“I think everything worked well, we stayed calm, there isn’t a lot of confusion on the radio, they know what to do.

“On the restart, luckily I had a good run and could go in the lead then I felt really comfortable with the car and the tyres again.

“I think I would have got through both of them anyway if he [Russell] had stayed out so I think it was a smart call to pit as well.”