Watch as Gervonta Davis grabbing his ex-girlfriend by the neck.

Hamilton on his Future: I’ll be at Mercedes until the day I die

Leclerc said "everything was under control" on medium tyres, but a poor Ferrari strategy call saw him drop through the field; Johnny Herbert described the latest failure as "embarrassing"; Carlos Sainz also reflected on a bad day after two slow pit stops

Charles Leclerc described Ferrari’s decision to put him on hard tyres at the Hungarian Grand Prix as “a disaster” as he surrendered the lead of the race and eventually finished sixth.

Leclerc started Sunday’s race in second and, after stopping for fresh mediums, appeared to be set for victory after overtaking George Russell on lap 31.

But when world championship leader Max Verstappen – charging through the field after starting 10th – stopped for a second time, Ferrari responded by pitting Leclerc early for hard tyres, a compound which other cars had been struggling on at the Hungaroring.

The decision proved to be a bad one as Leclerc was overtaken by Verstappen not just once, but twice after a spin, prompting a third stop for soft tyres which left him unable to finish higher than sixth.

And Leclerc, who is now 80 points behind Verstappen in the drivers’ standings, struggled to hide his frustration, telling Sky Sports F1: “We need to speak with the team and understand the thought behind putting the hard tyre on because I felt very strong with the medium.

Everything was under control and for some reason, I don’t know why, we went on the hards.

“I said on the radio I was comfortable on the medium and I wanted to go as long as possible on those tyres because the feeling was good. I don’t know why we took a different decision.

Honestly the pace on my side, I was pretty happy. The only thing is obviously everyone will remember the last part of the race where it was a disaster for me, especially with the hards.

“That’s where I lost the race basically. I lost 20 seconds with the pit, another six seconds on five laps on the hard because I was just all over the place on the tyre.

“We’ll speak about it inside the team and how to get better.

Explaining the decision on Sky Sports F1, Ferrari team principal Mattia Binotto expressed surprise at the poor performance of the hard tyre, as he backed the team to get things right after the summer break.

“We believed the hards could have been fast enough somehow to keep us in the race and try to have good position by the last laps,” he said.

“So, let’s analyse and let’s have a conclusion later.

“The entire team is great, I’m fully supporting them because I trust them.”

Sky Sports F1 analyst Jonny Herbert described Ferrari’s latest strategy blunder as “embarrassing” as he suggested that Ferrari had caved under the pressure applied by Red Bull in bringing Verstappen in early.

And he said there was plenty of evidence in the lap times of Fernando Alonso and Esteban Ocon to show the hard tyre was the wrong choice.

“I really don’t understand it,” Herbert said. “Why they didn’t look at the Alpines who were struggling on the hards, as well as everyone else on the hards?

“The pressure was put on by Red Bull there for Ferrari to react wrongly.

“They’ve got to get the right people in to allow them to do what Red Bull does and what Mercedes does. They need to sort it out quickly.

“When you’ve got a car that can win races and you are just giving away these race wins or maximum points that should be coming your way, it’s embarrassing.”

Sainz: We struggled as a team 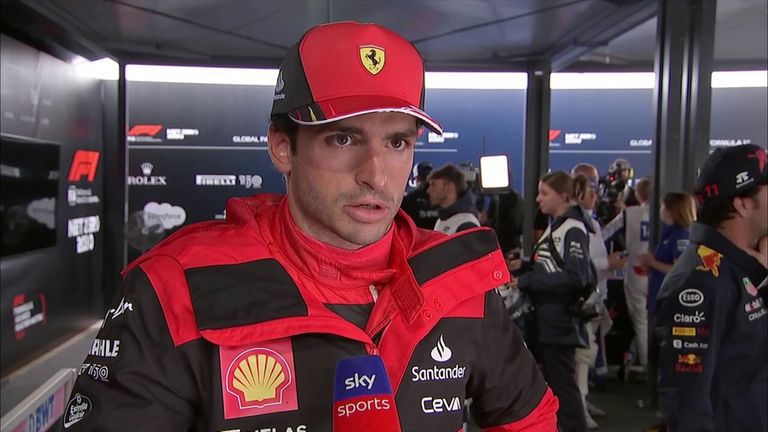 The other Ferrari of Carlos Sainz finished fourth, but felt he would have finished higher had he not suffered with two slow pit stops that saw him lose track position to the Mercedes.

He said: “We have been decent on pit stops all year but it is true that now and then there are a couple of pit stops that are failing us and we need to analyse what we can do better and be stronger in the second half.

“I don’t know what we could have done better on strategy, but I can tell you when the pace is bad like today the strategy is always difficult because if you don’t have pace with any compound you are always going to struggle with strategy because you have very little flexibility.

“Yes, the pit stop cost me twice today and it swapped my second stint because from probably leading the race I went to P3 and having to manage the tyres a lot, which is a shame but do you include that as a strategy? I don’t know.

“I think today we were just slow and I think if you compare our pace to the Red Bull on Friday against the Red Bull today there was clearly something in the car and the tyres that we were just not doing right.”

He added it was hard to explain why their flying race pace earlier in the weekend could not be replicated in Sunday’s lower temperatures.

“We clearly struggled as a team,” he added.

“Today we are a bit puzzled because we expected to have really good race pace but it is clear in these lower temperatures the track condition changes.

“We obviously had something going on with the car and the tyres that we were not fast.

“Something to analyse, to look back and regroup and see what we did wrong for this kind of conditions and come back after summer break with a better package.”

Watch as Gervonta Davis grabbing his ex-girlfriend by the neck.