Leclerc thanks Sainz for critical role in securing pole finish

The Ferrari driver secured his sixth pole position of the season by finishing ahead of Sergio Perez, Max Verstappen and Carlos Sainz in Baku;

by Niyi Ablaze
in Formular 1
0

Charles Leclerc says he had to “risk it everywhere” to take a pole position he wasn’t expecting for Sunday’s Azerbaijan GP.

Leclerc emerged victorious in Baku qualifying as he came out on top of a pole-position shootout to finish ahead of the two Red Bulls and his Ferrari team-mate Carlos Sainz.

It’s the Monegasque’s fourth successive pole position – and his sixth in eight races this season – but he admitted he wasn’t banking on it happening after being outpaced by his rivals right up until the final stages of qualifying.

Sainz had been on provisional pole going into the final round of flying laps, but wasn’t able to improve further after a mistake in the first sector, while the Red Bulls were unable to match Leclerc’s speed.

I expected to improve,” Leclerc told Sky Sports F1. “There was a bit of margin here and there, but not by three tenths. I risked it basically everywhere.

“Obviously all pole positions feel good, but this one I didn’t expect. In Q1 and Q2 I really struggled to see that we were faster, but it came together in the last lap. I managed to do a good lap so I am extremely happy.”

Perez: We could have been closer

Perez continued his strong form to join Leclerc on the front row, but the Mexican was left a little frustrated as a fuelling issue left him rushing his out lap at the end of Q3.

Despite the issue, Perez built on his Monaco GP victory last time out as he qualified ahead of Max Verstappen for a second successive race, with the Dutchman only 15 points ahead of his team-mate in the world championship standings.

“I think, certainly we could have been a lot closer,” Perez said. 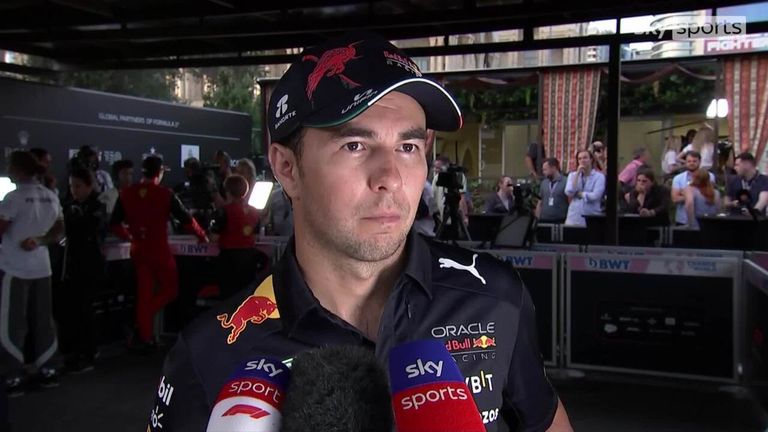 “It wasn’t ideal because we were out of sync on my lap, but I think P2 is still a good result for us. Tomorrow, if we can get into the mix, it will be good.”

Red Bull admitted that Perez being out of sync with the other drivers meant he missed the chance to get a crucial tow up the home straight, which could have got him closer to Leclerc.

“It was a shame for Checo [Sergio Perez] because he didn’t get the benefit of a tow,” team principal Christian Horner said. “But, he did have a perfect out lap and you can see his performance was pretty mighty.

“With a tow it could have been pretty close, but I don’t think we would have quite had the pace to nail Charles today.”

Verstappen: Streets circuits a bit of an issue 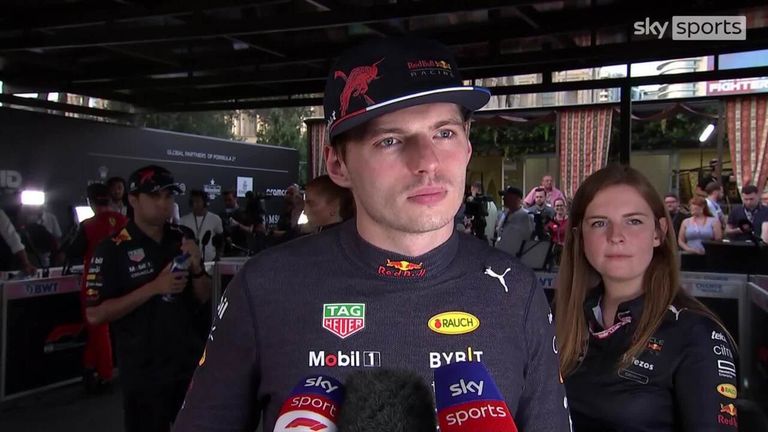 Verstappen leads the world championship by nine points from Leclerc and the reigning world champion admits that imperfections with his Red Bull have made the street circuits in Baku and Monaco a challenge.

“Over one lap again, it’s just lacking a bit of performance and not having the balance I would like,” Verstappen said.

“On a street circuit, to really push it to the limit with full confidence and being consistent in what you do, it’s hard when you don’t have that balance feeling in the car.

“I lacked that the whole weekend, in general. Tomorrow, everything will stabilise a bit in the race anyway in terms of how you attack.” Verstappen brushes the wall at turn 7 in the second round of qualifying in Baku.

Perez has been able to match Verstappen on the street circuits, but Verstappen appears hopeful that next week’s return to a ‘normal’ track in Canada may benefit him.

“So far, the streets circuits have been a bit of an issue,” Verstappen said.

“Maybe, when we go to normal tracks it will be a bit better but even there, but I am not entirely happy there either. There’s still a bit of work to do.